​​A lot happened in the past month! Maybe you’ve been so busy diving into all the excellent GitHub Universe 2021 sessions that you missed some of the additional features we released in October. Don’t worry—we’ve got you covered. In this monthly recap, we will go over all of the announcements, starting with the new GitHub Issues experience.

What was big in October?

During Universe, we announced that we’re bringing the new GitHub Issues to public beta with some new added capabilities, such as converting a draft issue to an issue, running bulk action in tables and boards, automating repetitive action through workflows, and setting your team’s tempo with iterations. Check how we’re using the new GitHub Issues for our public roadmap and watch the interactive session to learn more.

In other big news, GitHub Codespaces is now generally available for GitHub Team and Enterprise Cloud accounts. You can now spin-up dev environments from your browser or through Visual Studio Code with Codespaces. Go ahead and try the new Codespaces features, such as the new devcontainer feature composition, GitHub CLI, and more.

Literally everything we shipped

At Universe, we announced the command palette beta, which allows you to execute commands from your keyboard: search for repositories, change themes, create issues, and more. It’s available to all Github.com users. Open the command palette on Windows and Linux with Ctl k or Ctl alt kand on Mac with ⌘ k or ⌘ option k.

That’s not all you can now do with your keyboard. We’ve added keyboard shortcuts for quotes and lists in Markdown files, issues, pull requests and comments.

One new UI trick: toggle between source view and rendered Markdown view through the UI by clicking the button to “Display the source blob” at the top of any Markdown file. 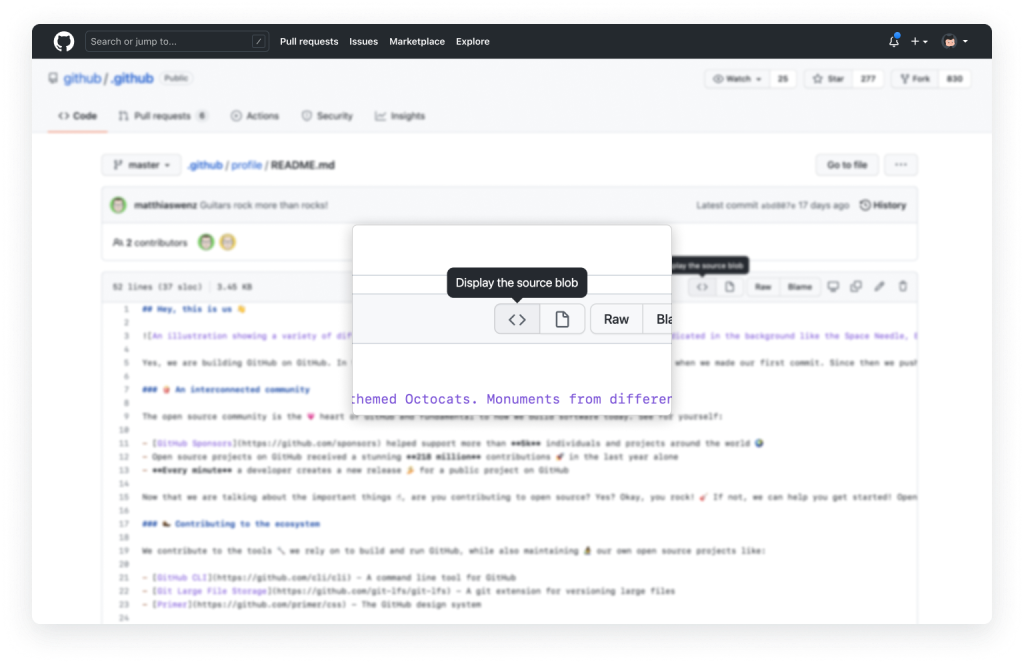 A few months ago, we introduced the permissions key in the Actions workflow config, which enables you to control the permissions granted to a particular workflow or job. Workflows triggered by Dependabot pull requests now respect the permissions specified in your workflows, so you can control how you manage automatic dependency updates. Default token permissions remain read-only.

We’re excited about the public beta that lets you reuse entire workflows as if they were actions. Instead of copying and pasting workflow definitions across repositories, you can reference an existing workflow with a single line of configuration.

More granular personal access token scopes are now available for self-hosted runners in enterprises. You can use the manage_runners:enterprise scope instead of the admin:enterprise scope for your tokens.

Finally, the Windows 2016 runner image will be removed from GitHub-hosted runners on March 15, 2022.

You can now set whether a repository allows forking when creating or updating it using either the REST or GraphQL API.

The REST API header is no longer needed for the twenty-three REST API previews that have been graduated.

The Codes of Conduct API preview, which was accessible with the scarlet-witch-preview header, is being deprecated.

GHEC enterprise organizations now have access to custom repository roles (in beta). You can configure these roles from a set of 40+ fine-grained permissions based on your specific needs.

It’s also easier to get help when you need it. In GitHub Docs, you can now choose Enterprise Cloud from the “Version” drop-down to see content that aligns with the experience of using GitHub Enterprise Cloud.

In addition to the new public beta of GitHub Issues, we’ve been working on some quality-of-life improvements:

The Explore tab on GitHub Mobile has been redesigned to make it easier to find cool projects on GitHub, including personalized repository recommendations and trending projects.

A couple of other changes: as previously announced, the npm registry now requires TLS 1.2 or higher for all requests, including package installation. We’ve also upgraded the npm CLI to version 8.

We announced a limited beta for pull request merge queue during Universe. This feature enables the efficient merging of pull requests without the typical delays that exist between merges today. It works by validating, in parallel, different combinations of pull requests identified as “ready to merge.” Learn more, including how to apply.

The diff setting to hide whitespace changes in a pull request is now remembered. You no longer need to re-enable it when you switch to another tab, or when you come back to the same pull request later.

You can now use a fixed-width font in Markdown-enabled fields. These fields previously used a variable-width font, which can present challenges when you’re trying to edit advanced Markdown structures like tables and code snippets.

Two improvements to the release process on GitHub are generally available:

It’s now easier to search branches by exact name. In the code browser, when a name exactly matches what you type in the search box, it moves to the top of the suggestion list.

When a new tag is created, the push webhook payload will now always include a head_commit object that contains the data of the commit that the new tag points to.

Dependency review is generally available! This security feature helps you understand dependency changes and the security impact of these changes when you’re reviewing pull requests.

Here’s a time-saver: if you draft a Security Advisory for a repository and the vulnerability impacts multiple packages, you can now identify all affected products in that advisory rather than having to draft multiple advisories.

Speaking of time-savers, organizations can now use the “security manager” role to grant entire teams the permission to manage security alerts and settings on repositories across the organization.

For tax purposes, maintainers will now see the VAT status and location of their sponsors in transaction exports.

Take a look at our public roadmap for what’s coming next, follow GitHub Changelog on Twitter, and check back on the GitHub Blog for another recap next month.